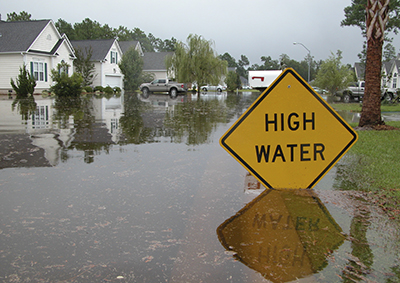 If you’re in the market to buy or rent a home and haven’t heard of Risk Rating 2.0, there are a couple of factors regarding Flood Insurance that you may want to consider before signing that purchase-and-sale agreement or lease.

First, be aware that the National Flood Insurance Program (NFIP), which provides coverage to the public through approximately 60 insurance companies, is about to change, with new classifications under its recently unveiled Risk Rating 2.0. The new system — scheduled to go into effect for new policies as of October 1, 2021, and for all other policies on April 1, 2022 — is designed to eliminate dependence on outdated flood zone maps and provide more equitable pricing, with high-value homes in flood-prone areas targeted for significant rate increases.

According to the Federal Emergency Management Agency (FEMA), which administers the NFIP, the new system will result in either no change in premium or increases of up to $20 or more per month every year at renewal for 77% of current Flood Insurance policyholders, while 23% of policyholders will receive immediate premium decreases. Most of the monthly increases — about 66%, according to FEMA — fall in the $10-or-less range.

Second, know that any responsible insurance agent or broker will advise you to strongly consider purchasing flood coverage, citing facts and statistics such as these:

The average flood insurance policy through the NFIP is $734 per year, according to the LendingTree website, so that may be a good figure to include when calculating the complete costs of buying and owning a home.

Since its creation in 1968, the NFIP has rated risk based on a home’s elevation within a flood zone, a system that, in effect, subsidized flood coverage for some dwellers in coastal and other flood-prone areas.

Over a span of 30 years before Hurricane Harvey struck Greater Houston in 2017, for example, 47% of claims submitted to FEMA from that region were outside zones determined to have a 1% annual chance of flood. That was largely because the maps used to classify flood zones took into consideration neither the development of land that once served as a natural sponge nor climate change that resulted in greater numbers of severe storms, as noted in a 2020 report by the nonpartisan public policy research group R Street. So when Harvey deluged Greater Houston with 1 trillion gallons of rain in four days, areas classified as low risk were inundated, resulting in more than 100 deaths and billions of dollars in property losses.

The current rating system, despite having undergone numerous changes since its inception, also does not take into consideration a building’s replacement cost, meaning that owners of higher-value homes have been charged the same amount for flood insurance as owners of lower-value property in equally flood-prone locations. Combined, the proliferation of claims and underpriced policies have left the NFIP $20 billion in debt.

Under Risk Rating 2.0 factors used to determine Flood Insurance rates will include:

“FEMA is building on years of investment in flood hazard information by incorporating private sector data sets, catastrophe models and evolving actuarial science,” the agency said in a release announcing the changes.

Who Will Be Hit Hardest

Risk Rating 2.0 isn’t designed to erase the NFIP’s debt – in fact, FEMA’s revenue is projected to drop by about $500 million in its first year – but it is expected to increase revenue over time while making the program more equitable. According to Bloomberg, FEMA officials said it could take 15 years for owners of the highest-valued homes to reach the current cap of $12,000 per year, with the cap subject to adjustment.

It is worth emphasizing that FEMA’s projected rate hikes are based on existing Flood Insurance policies. A February 2021 report by the New York-based nonprofit First Street Foundation found that if all flood-prone properties were rated for Flood Insurance, 4 million would face hikes and the average premium in high-risk flood zones would be $7,895 per year, according to Insurance Journal.

Nevertheless, First Street determined in its 2020 assessment of national flood risk, the number of properties lacking flood insurance is of greater concern than the premiums property owners in flood zones face. “This equates to a total of 14.6 million properties across the country at substantial risk, of which 5.9 million properties and property owners are currently unaware of or underestimating the risk they face because they are not identified as being within the SFHA [Special Flood Hazard Area] zone,” the assessment stated.

Private Flood Insurance may also be an option for those seeking lower premiums and/or higher limits than the maximums of $250,000 for the structure of the home and $100,000 for its contents.

What You Can Do

Here are five tips for mitigating the risks and costs of flooding:

Buying a home may be the biggest investment in your lifetime, but it isn’t your only investment. For insights into the U.S. markets and economy, join Robert Janson, Senior Portfolio Manager in Alera Group’s Wealth Management division, for an April 28 webinar in which he’ll provide his quarterly State of the Markets Review. He’ll discuss first quarter results and trends, with a focus on interest rates as well as the stock and bond markets.

REGISTER FOR THE WEBINAR

September 2021 is a busy month for compliance. Plan sponsors have obligations to meet this month, but we will focus on two in this quick alert. COBRA Subsidy Expiration Notice and Summary Annual